Just back from Berlin & Bordeaux... 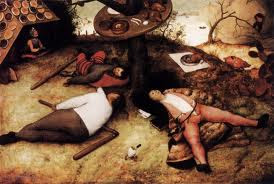 Despite some trepidation, I enjoyed being part of the Berlin Poetry Festival's 'Parliament of Poets' last week. 28 EU poets were asked to comment in a renshi on the state of Europe and the economic crisis: an alarming responsibility, and a difficult commission.

The renshi is a sort of poetic herman. In groups of five, each of us created a poem using each other's last line as a starter. I followed Latvian Arvis Viguls, whose poem ended with the line 'faith will make us stand facing the wall.' I was afraid of getting mired in gigantic abstracts. In the end, the work emerged from the concurrence of three synchronistic experiences: reading Hilary Mantel's 'A Place of Greater Safety' (where she explores the role of the price of bread in the French Revolution), an unexpected visit to a working grain mill in the Shetland South Mainland, and revisiting the idea of Cockaigne/the Fool's Paradise, in which excess beyond imagining is explored by Pieter Brueghel in 'Luilekkerland'.

We're now experiencing the very tangible consequences of the Crisis – and many of the poets I met came from countries who will have a harder time of it than the U.K. However hard I find it to make sense of the enormity of the numbers, it was an inexplicable comfort to see and hear that mill in action: chaff and ground corn accumulating around the churring millstones.


Faith made us stand facing the wall.
But to visualise debt on this scale we had to climb it

the pounds melting off them,
carving knifes dropping from their clove-studded crackling – as they cantered

the shattering flats of sour curd. Someone hoisted a greasy pole,
crowned it with a cottage loaf, and it was idolised – it started a riot.

When we'd seen the bonus-trees bust, shrink and canker,
we'd seen enough – we climbed down peerie-wyes

to open the sluice-gate above the little mill –
the sober, brown water clasped the wheel,

a nutritious crater began to accumulate
around the susurrant millstones.

And downstream, this one excess – swans flocked to the inundated pasture,
and up-ended there, flickering –

it wasn't worth anything, but looked just like a bowl
of liquid flame.

Jen Hadfield
For the past eight years, Shetland has persistently influenced my poetry and visual art.Since my second book Nigh-No-Place, won the T.S.Eliot Award in 2008, I’ve worked primarily as a poet, creative writing tutor, and classroom assistant, but walking, and gathering wild food and materials for my visual art-works, are as important in my creative life as my language-based practice. My third poetry collection, Byssus, is out now.

Contact Me Or Order Byssus, Nigh-No-Place, Almanacs and The Printer's Devil & Little Bear