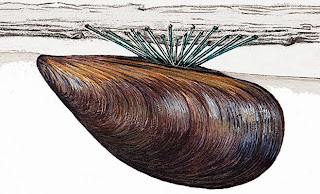 It's not due out until mid-February, but apparently a finished copy of my third poetry collection, Byssus, is sitting on a desk in the Picador offices, about to be posted to me. Way too exciting!

'Byssus' means the strong fibres of what used to be known as 'sea-silk', that some bivalves, including mussels, use to secure themselves to their rocky homeplace. You can make yourself a tie out of it, apparently.

Half-knowing what I meant, I heard myself telling a friend this summer that the act of writing this poetry collection had finally become a performance. I remembered then that that's what it felt like before. It took the threat of publication – the real risk of finding a reader – to stand a chance of making real work again.

And what was the work? Camping on the rosy cliffs of the Lang Clodie. A cep-hunt on arctic terrain in the north of Shetland. My recurrent dream, climaxing in the hectic extremes of the Spring tides, about tugs-of-war with brawny spoots (razor clams). And wasn't there something to try to say about puffballs? Hours lying on the banks with the surf thundering under and through me.

The problem of poetry is that while it dangles before us the possibility that we might 'get home' to such moments of animal absorption, our effort rarely – thanks to pernicious habits of intention and self-consciousness – succeeds. This book is trying very hard; in time, I'll see how many of these poems do actually vibrate on the present tense's 'thin line'. (Gaspar Galaz)

Whilst it is fashionable to speak of the liminality of islands, with people titillated by the notion of them as World's End, a brink to teeter on; this world-view denies that for island-dwellers, they can be the centre. I wanted to dig down into this place, prospecting the infinitely-revealed complexities of 'home'.

Byssus is, I hope, an arched book: climbing through spring's maniacal flowering to summer's zenith, declining to exhaustion, and a contemplation of how it batters us just to live, learn, make and love. I have always fetishised the idea of home, and perhaps, Shetland. Byssus is, I hope, as it is for a mussel, my holdfast in such wild water.

There now follows a celebration of the mussel's beard…

I will order Byssus for lunch; have been fat on the thinness of it long before I got here. Your words about your words are exquisite. I'm sure the poems themselves will muscle me, razor the uncurl, the pearl of me. You dive for. Can't wait to read it. First time, only seconds ago, I heard of you and read your blog post. Byssus sounds like it will be the hold fast, the ok for the islands we are, the home we can't find until stranded. You have found a reader. Thank you for all your beach combing.

Jen Hadfield
For the past eight years, Shetland has persistently influenced my poetry and visual art.Since my second book Nigh-No-Place, won the T.S.Eliot Award in 2008, I’ve worked primarily as a poet, creative writing tutor, and classroom assistant, but walking, and gathering wild food and materials for my visual art-works, are as important in my creative life as my language-based practice. My third poetry collection, Byssus, is out now.

Contact Me Or Order Byssus, Nigh-No-Place, Almanacs and The Printer's Devil & Little Bear